A downloadable game for Windows

Hello There! My name is Nick Oztok and I'm the creator, developer, and programmer of Aurascope. It's an original indie platformer that I'm making with my best friend Jonah Worley under our company Brobro Studios!

While the game is primarily a platformer, there are so many different elements from various genres that contribute to it being so much more than your typical platformer. For instance we emphasize a lot on collecting goodies and exploration, as well as including elements from adventure, puzzle, RPG's and more to deliver a robust experience! It's really meant to be a blend of many different game genres so there's something for everyone to enjoy.

This game is still in very early development, but there is one very short beta to try out to really get an idea of what Aurascope is all about! While there's still a bunch to do we do try to showcase progress frequently though! We mostly showcase updates on weekends on our Twitter and we'll try to be active here too!

Check out the Discord Server and join the Aurascope community!
Also follow Aurascope's social medias for general updates too!

COMING SOON! While we have it finished we want to properly show it off once it's completed in-game fitted with proper visuals and music. We'll at least share this little snippet with you below along with this beautiful artwork made by incredibly talented Andrea!

Trace and his best friend Aurora arrived at the beautiful Starstone Forest walking through the lush golden grass pondering at what caused the mysterious energy burst. 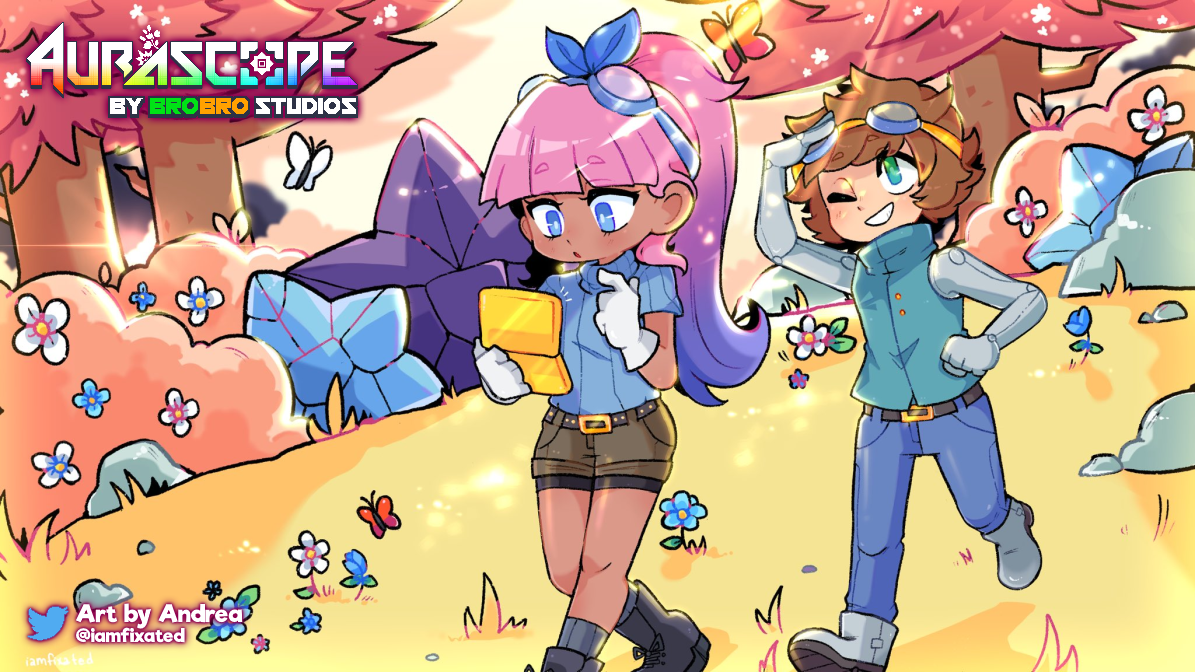 In Aurascope you play as our adventures Trace and Aurora to collect Energy Cores  scattered throughout the lands to restore power to the Islands of Skylight. Using your metallic arms and your Aurascope you can pickup and store any object that you can hold in your hands. Mainly things like Aurastones, basically blocks that can have many different attributes and abilities.

For instance you can use Regular Aurastones to help reach new ground!

Or maybe use a Bomb Stone to clear up some rocks blocking your path!

That's not all though. Trace is a lean, mean, jumping machine with an array of moves at his disposal! He's definitely quite the acrobat using moves like his roll, diving leap, walljump, and more he can really get around just about anywhere! Perfect for speedrunning!

Smash pots, collect goodies, and when implemented, you'll be able to level up Trace by collecting XP from collecting Energy Cores, nabbing Star Reactors, defeating baddies, and beating challenges/missions to increase his health, ???????, attack, or defense! What is ??????? you may ask? We'll reveal that later on when we can properly show it off!

For now we hope you'll be looking forward to Aurascope in the future. I'm putting all my heart, passion, and soul into this game to really make it something memorable and enjoyable. Stay tuned!

Extract the files from the zip into a folder then launch the .exe file.

Really cool, but the controls are all messed up when using a controller, and the instructions are sort of lacking. I dunno what to do so I get stuck pretty quick. How are people making the blocks appear?

i can not lie one of the best games on this site good job :D

this beta is incredible

I love this game so much, the music and the graphics worked perfect i made a video about it. I hope you guys like it.

For some reason, I get a shader error when I try to run the game. What do I do?

Reply
Retrocarus169 days ago
15 minutes to end up to finish. Yet it has been very nice.
Reply
RamaTheModder2011190 days ago

OMG Let Me Download it. It So Be Cool

i like it but i cant find where i am from

"and even RPG games"
"and even Role Playing Game games"

Absolutely awesome demo, can't wait till it's released! Made top 5 in the ranks!

dude i love psf and seeing this game makes me wonder,is it made with part of the base of psf

At the time of writing, pressing ESC when remapping your controls will close the game and completely destroy your controls (everything is binded to "-1") and the only way I've found to fix the issue is deleting the Aurascope folder in appdata/local/.

Other than that, great little demo you have here! Had a lot of fun doing acrobatics.

This happened to me. Thank you for helping!

Platformers in general have a special place in my heart but this loved up to every potential I had in my head when I went into it, especially as it's still in it's early stages. I'm very very much looking forward to seeing how this progresses and seeing how the world grows!!

Just saw your game on the itch.io channel. Congrats on being featured!

I haven't had the chance to play the demo yet. (to be fair, also Linux, lol)

But just looking at the footage on the feature video and your devlog, I have a few remarks...

First of all, the art is absolutely gorgeous! Also I can tell you've put a lot of effort into giving a lot of depth to the movement options available.

Having the weakest enemy in the game require two hits to kill is a bit bold from the perspective of a new player learning the ropes, but at the same time it depends on your target audience, and I see it introduces the combo feature which is cool.

Honestly the major gripe I could see myself having while playing this game is the aurascope build mode. It seems to take away from the flow. While watching the itch.io feature video, I noticed that the player started to jump in mid-air and then use the build mode to place tiles directly beneath them. Which made me think... why not just have that the default build mode? Have the aura cubes materialize directly beneath the player's feet, and save the mode switching for when precision is really needed. Maybe when crouch-sliding with the build key, you could materialize a bunch of cubes beneath you at once as you move.

It might even be possible to add a "flow" option to the bombs as well, with a parabolic trajectory. The trajectory could be displayed in the world. Perhaps the parabola varies in size periodically as you hold down a key. (also, I'm assuming you're trying to avoid using the mouse?)

Also, I wonder if the coins bounced more. Might be cool or really annoying.

proably gonna make a video on this

My only real concern about the game is that the jump-attack feels...off. Like the contact area isn't the width of my sprite, so I end up messing up the stomp attacks.

Just placed top 100 in my first run. This game is pretty good, poog even.

This game is impressive. I have not had a game like this in a while where I actually got hooked to collecting stuff. So if your curious. I made a video. Check it out if you like.

I like this game so much, but sometimes the jump does not register correctly, meaning falling down some platforms and do some areas more time than necessery. The other thing that bugs me it's that I can't absorb blocks while jumping: If I can place them mid-air, why can't I remove them as well? Plus I can't re-unlock the speedrun mode in the demo, even after taking all the stars.
But, like I said, I like this game anyway.

Will this be a paid product?  If so, will there be demos for us to try?

Like every good indie game, it will be paid in the end and have a free demo. At least that's what I'm assuming. 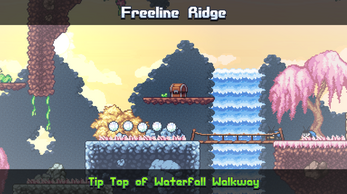 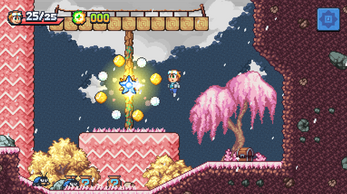 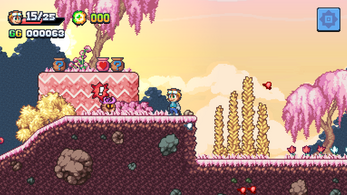 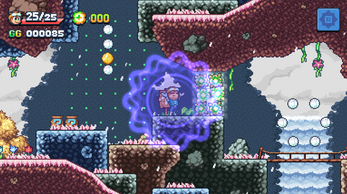 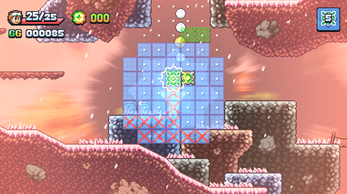 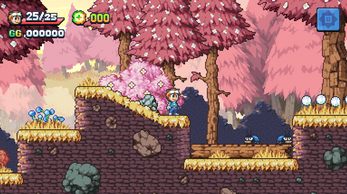 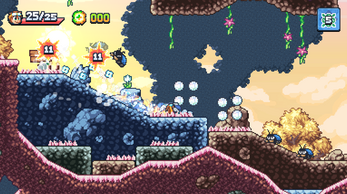 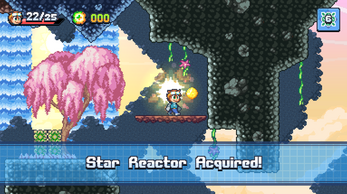 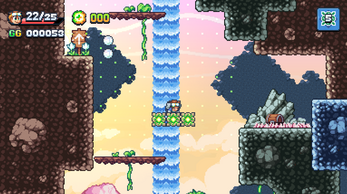 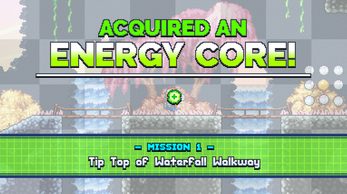